The Wolf Among Us

Developer: Telltale Games
Publisher: Same as Above
Released on Oct 11, 2013

The Wolf Among Us is a telltale game inspired by the Fables comic with the same name. The Fables have fled from the homelands to start a new life in Fabletown, disguising themselves as humans. This interactive mystery thriller takes the POV of the Big Bad Wolf who is investigating a bizarre murder case shrouded in a web of mythical folklore and shady conspiracies.

Warning: This game is rated M for mature. Please proceed with caution as it does contain extreme violence, blood, sexual content, nudity, and vulgar language.

In quick time events (QTEs), every decision has consequences, so you have to think fast and make the right one. The Telltale games are known for weaving intricate stories into context-sensitive gameplay.

I can assure you that The Wolf Among Us is not nearly as stress-inducing as Jurassic Park: The Game due to the forgiving nature of its QTEs. You won’t need a controller to ace this one. The WASD keys are enough to get by the fight scenes. 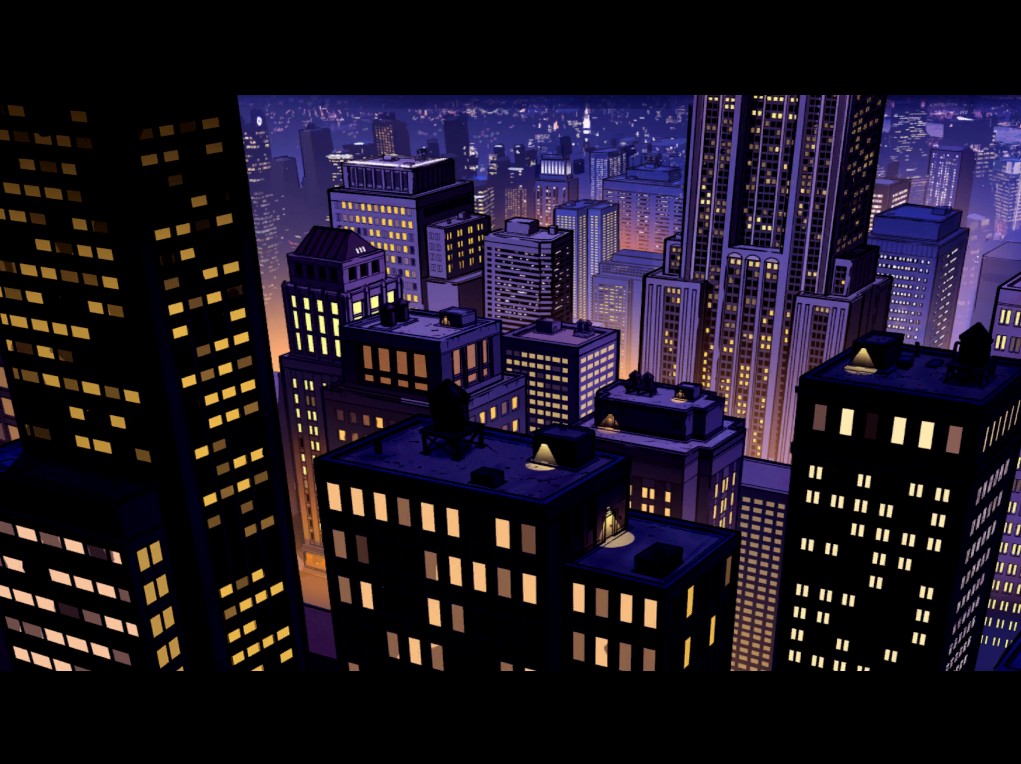 From the creators of The Walking Dead, this series is a choose-your-own-adventure game, except unlike a visual novel, everything is boldly animated and plays out in rush mode. You can’t hesitate on any decision for it has a time limit.

The game isn’t too long; I’ve finished it in under 15 hours. Season 1 spans over five episodes shown below.

Each episode is divided into six parts, serving as checkpoints to keep track of where you left off.

The Wolf Among Us is presented in lengthy cutscenes where you’re given on-screen prompts to take action when the opportunity arises. For the most part, you will be following the story in motion during cinematic sequences that keep you at the edge of your seats.

I encourage you to experience the story for yourself so I’ll try not to spoil the major turning points of the game. The story is affected by how you play, excluding major plot points that always produce the same results regardless of your choices.

The Wolf Among Us follows the comic’s storyline almost to a T. Once upon a time, there was a community of fairy tale characters living in New York City. Wearing disguises called Glamours, they tried to fit in with the mundane world. 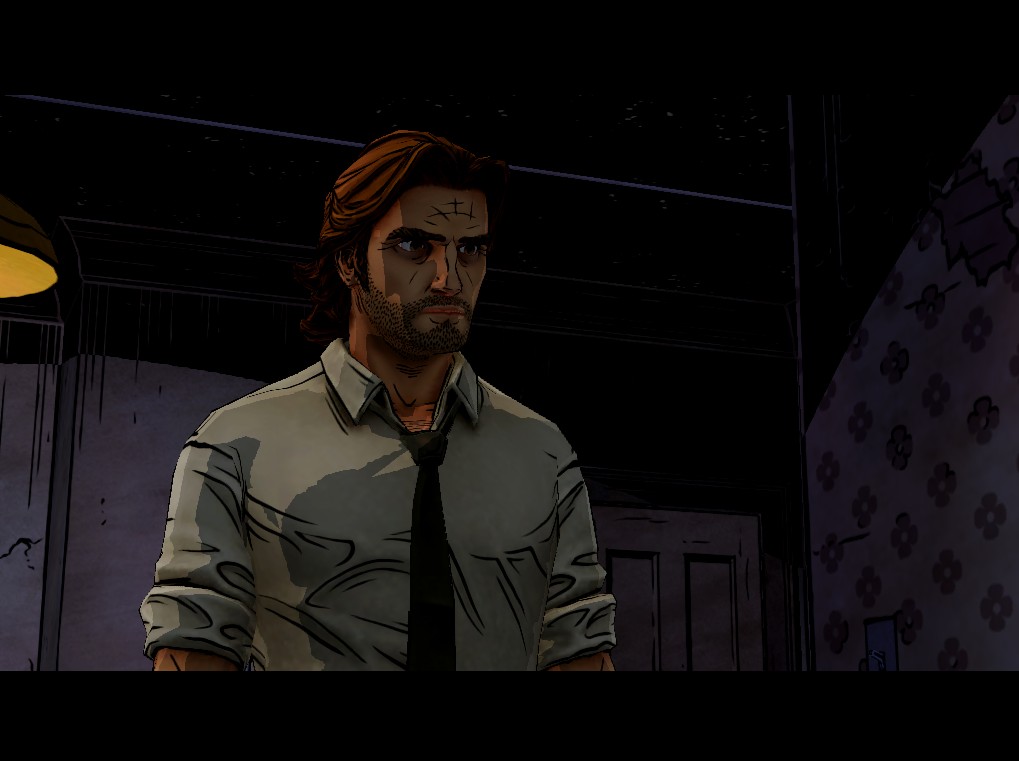 Sheriff Bigby, formerly known as the Big Bad Wolf, is responsible for keeping the other Fables in line because of the frequent fights that break out, provoked by long-held grudges from centuries ago.

As the sheriff of Fabletown, Bigby Wolf is the only one capable of enforcing the law against Fables who have special powers that make them stronger than the “mundies” (slang for humans).

The story begins with Sheriff Bigby pressuring Toad to get a glamour so he won’t be sent to the farm along with the other talking animals. Things quickly go south when the Woodsman upstairs flies into a drunken rage, attacking an innocent woman. 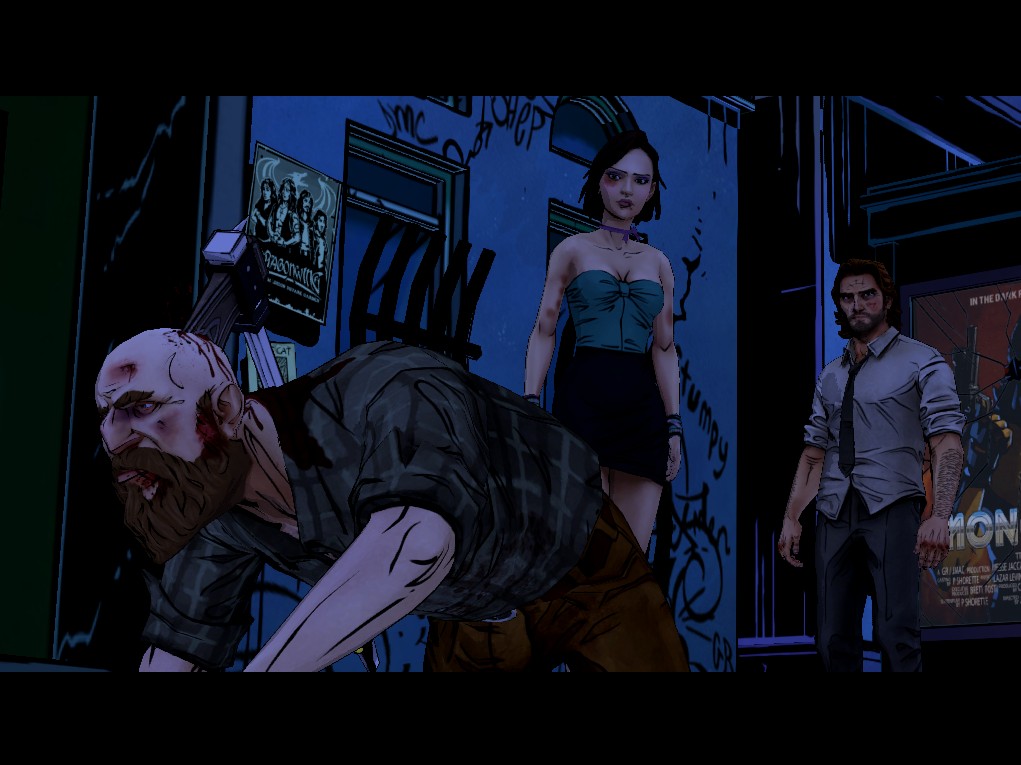 Bigby confronts him and manages to restrain him long enough so that they both fly out the window and crash down on Toad’s car. The woman introduces herself as Faith, admitting that she just wanted to get her money back. Bigby offers to pay for it and they part ways.

You’re not as bad as everyone says you are.   – Faith

Bigby lives in a shabby apartment with his roommate Colin, one of the Three Little Pigs. It’s revealed that Bigby has a bad reputation among the Fables because of his past actions. (i.e. Eating Little Red’s grandma and blowing down the pigs’ houses.) 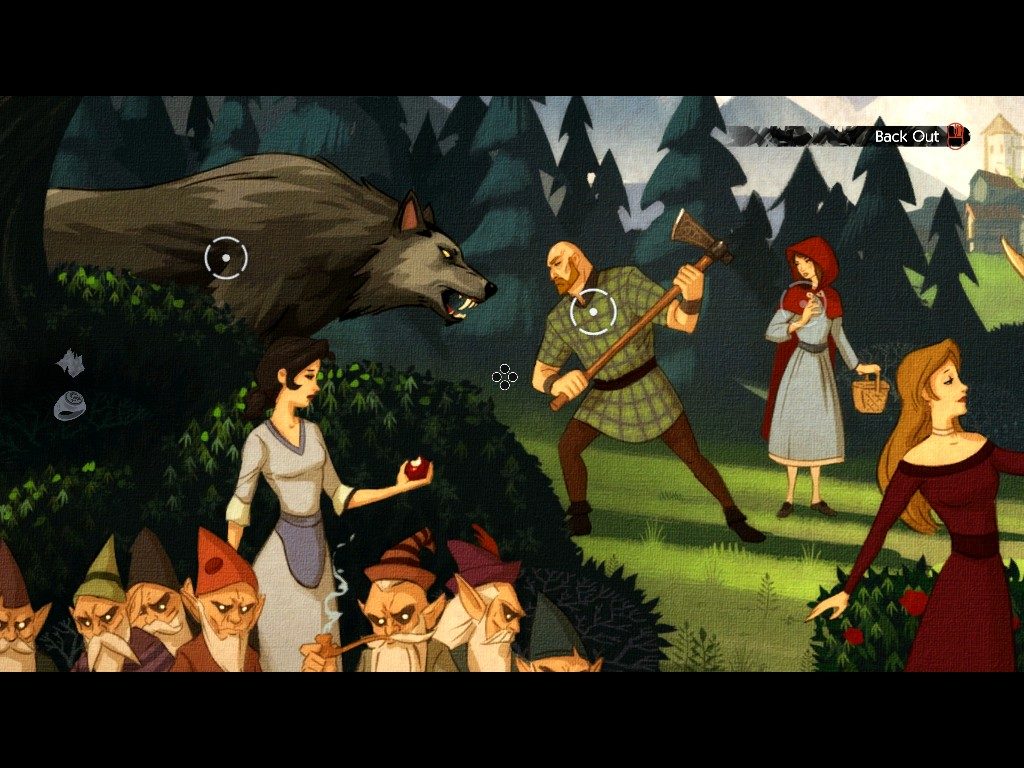 This isn’t exactly a story of redemption, but you do decide whether he takes on tough situations through sheer violence or talking it out.

He receives an unexpected visit from Snow White who drags him outside where to their horror, lies the decapitated head of the girl from before. Who are the suspects? And who is the real culprit? The case is up to you to solve.

The Wolf Among Us Gameplay

You can control Bigby using the WASD keys. You can’t run but press shift lets you move a bit faster. Walk around places until you see large circles that have icons on them. Mouseover the icons to see how you can interact with the object. Your options are to examine, pick up, use, knock, kick, open doors, or talk to someone. Picked up items go directly to your inventory. 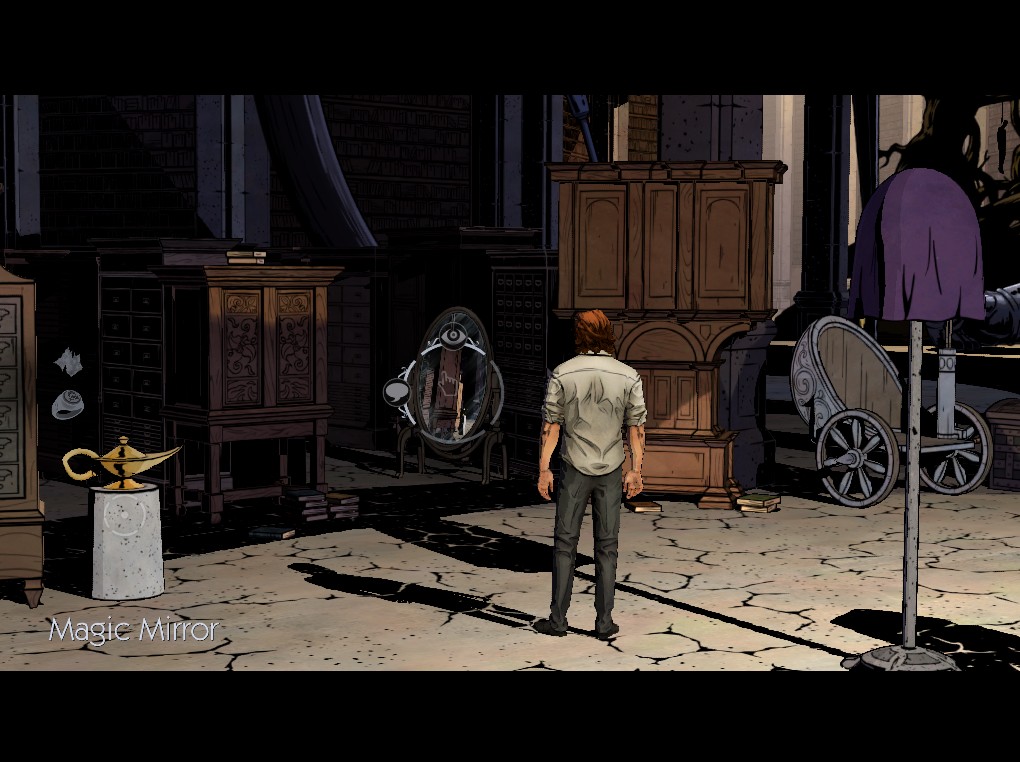 This is the Business Office where Bigby and Snow can speak to the magic mirror to spy on suspicious Fables. The deputy mayor, Ichabod Crane is in charge of their murder case though he does seem to stay out of the investigation process. Then there’s Bufkin, a flying monkey who drinks too much. He helps find records of lesser-known Fables. 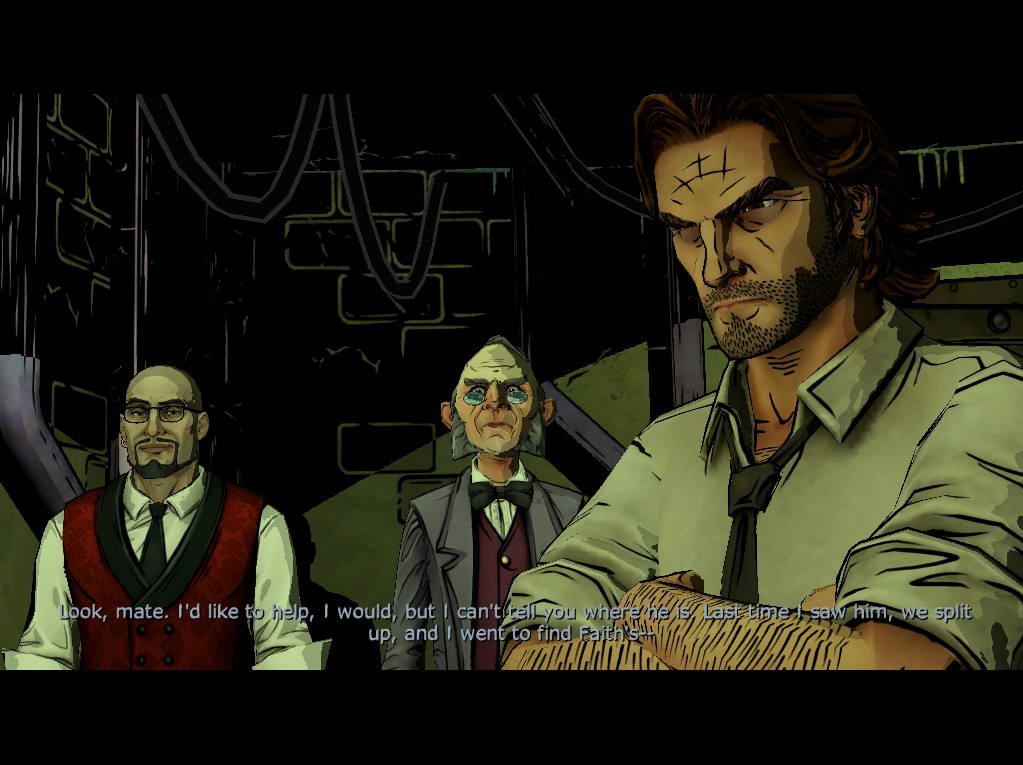 Important conversations are presented as cutscenes. You get to choose what Bigby has to say. Out of four options, one is usually nice, the second is demanding, the third sounds tough, and the last one is to stay silent. Other characters will react to Bigby’s responses. You can console them, press for information, or attack as a last resort. 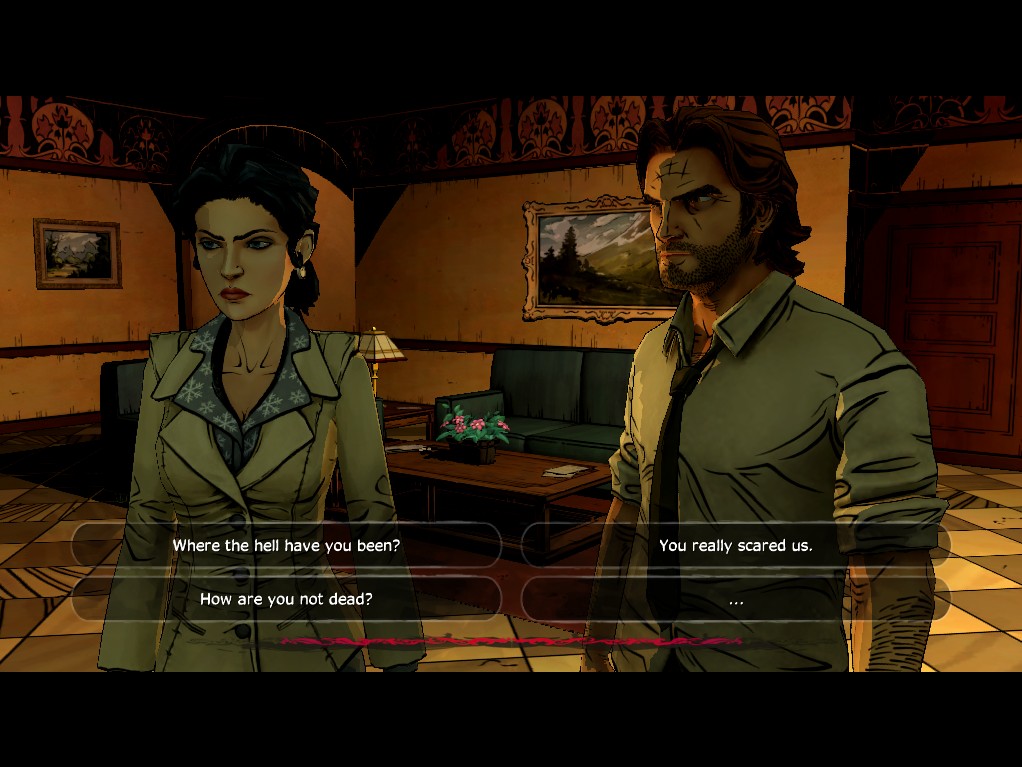 You only have 15-30 seconds to respond to each dialogue option as the pink bar shrinks. This is to maintain a momentum in the story. If Bigby is in danger, you’ll be pressured to make snap decisions. Some fights are unavoidable, forcing you into a QTE. Don’t screw up too much or else Bigby will die. 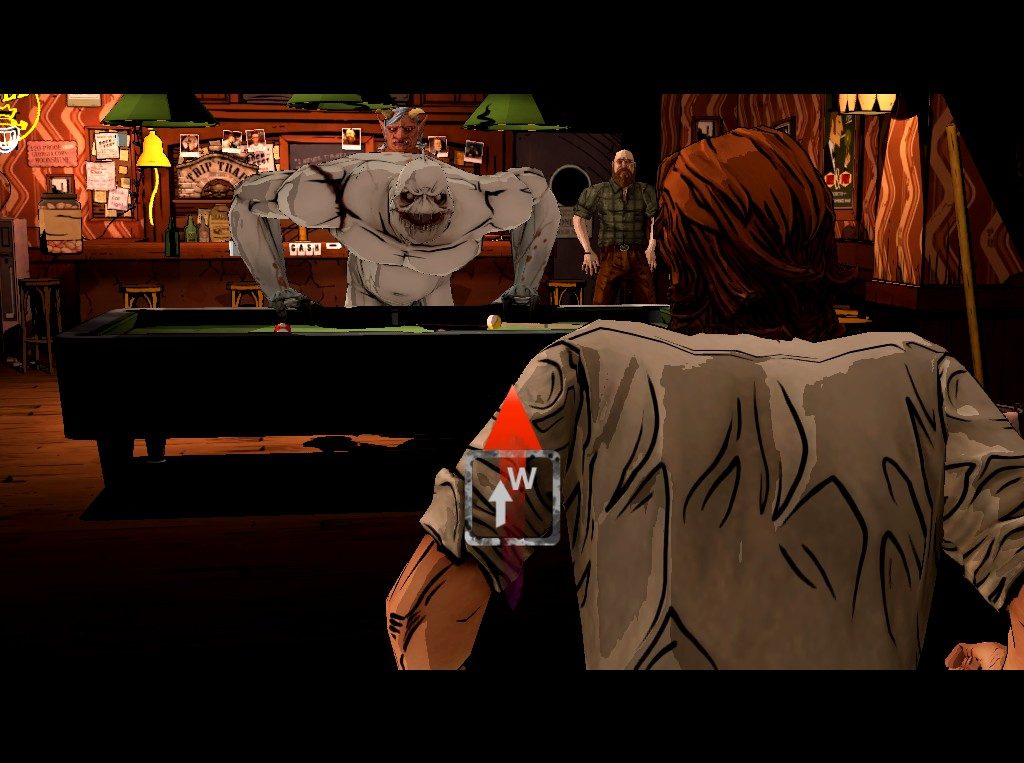 Yes, the QTEs are all about button mashing your way to victory. Bigby gains the upper hand on his opponents whenever you click on one of the red circles. Fight scenes are seriously gruesome, watch him tear off Grendel’s arm at a bar, stab Beast in the eye, you name it. Yeah, Fables recover fast since they are mythical beings. 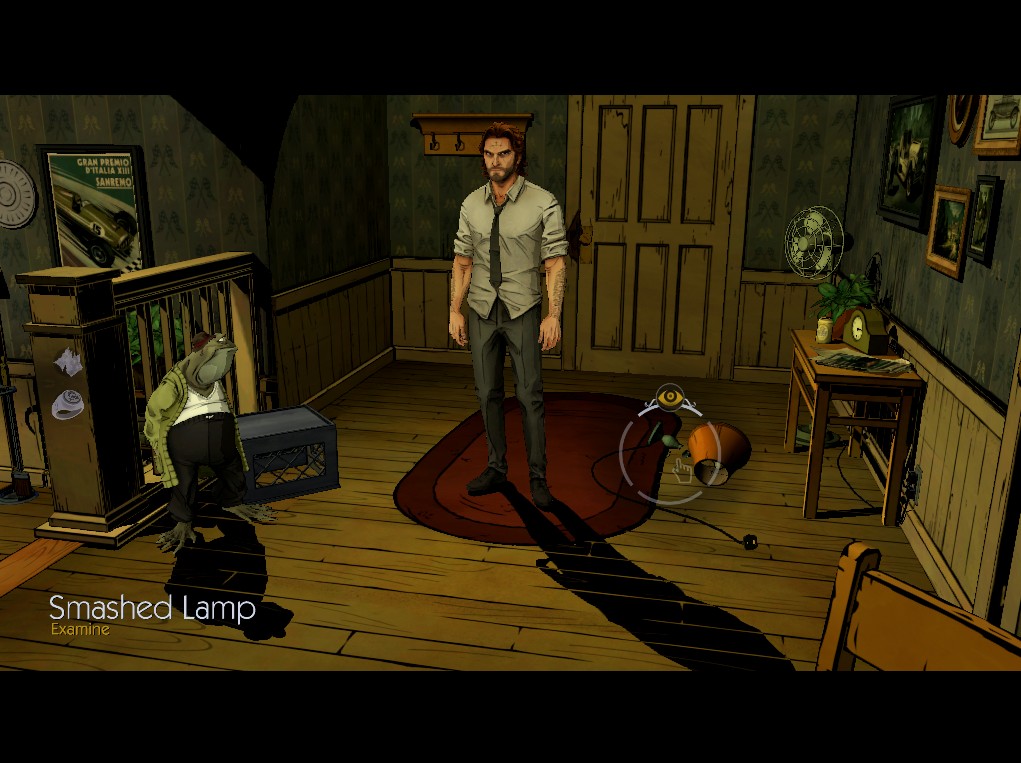 At certain points in the game, you will hit a three-way crossroad, where you can pick a location to search for clues. The first choice occurs near the end of Chapter 1. Bigby can accompany Snow to visit Toad’s place or let Prince Lawrence know about his wife’s murder. Heading off to another part of town may help you gain information on the suspects but you do miss out on the other places.

Once in awhile, you do get a break from all the thrilling action. You might need to investigate the crime scenes and pick up any items that seem related to the murder case at hand. Bigby has more than enough time to deduce the cause of death. However, finding the killer is not as easy when they use magic to cover their tracks. 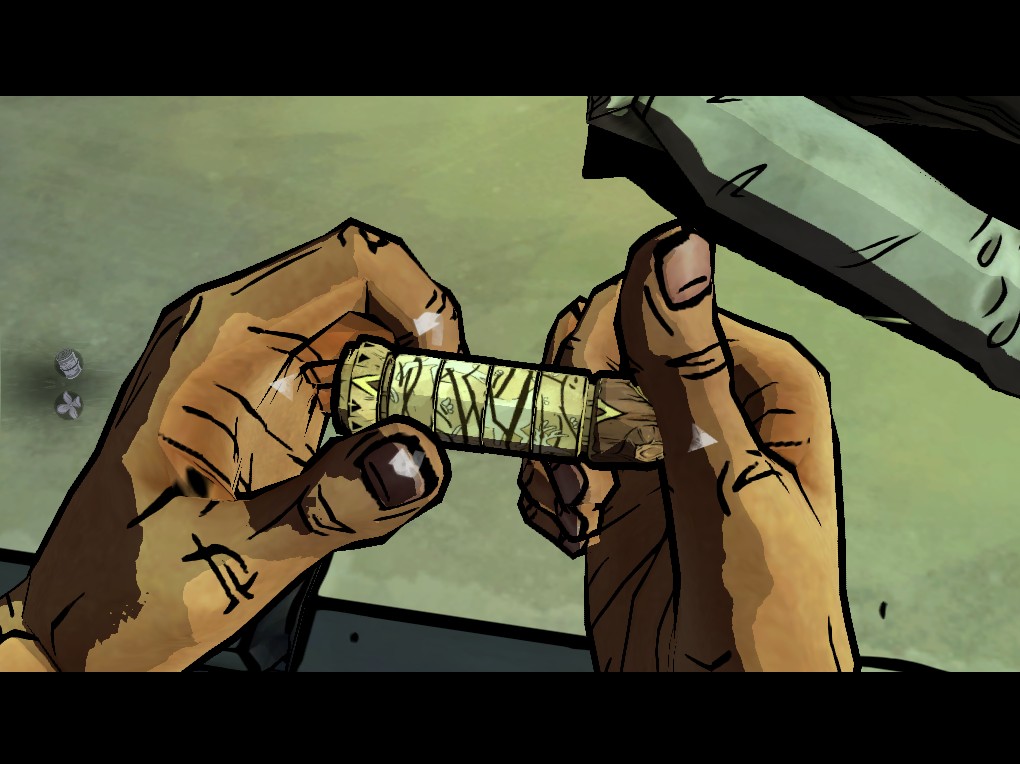 As a murder mystery, you’ll deal with some shady characters like the Tweedle Twins. No matter what you do, Bigby will make progress on his investigation. Uncover more clues by meeting up with Fables who seem to hate you because their calls for help were ignored by people among your ranks. You could get on Fabletown’s good side but it will require breaking a few rules. 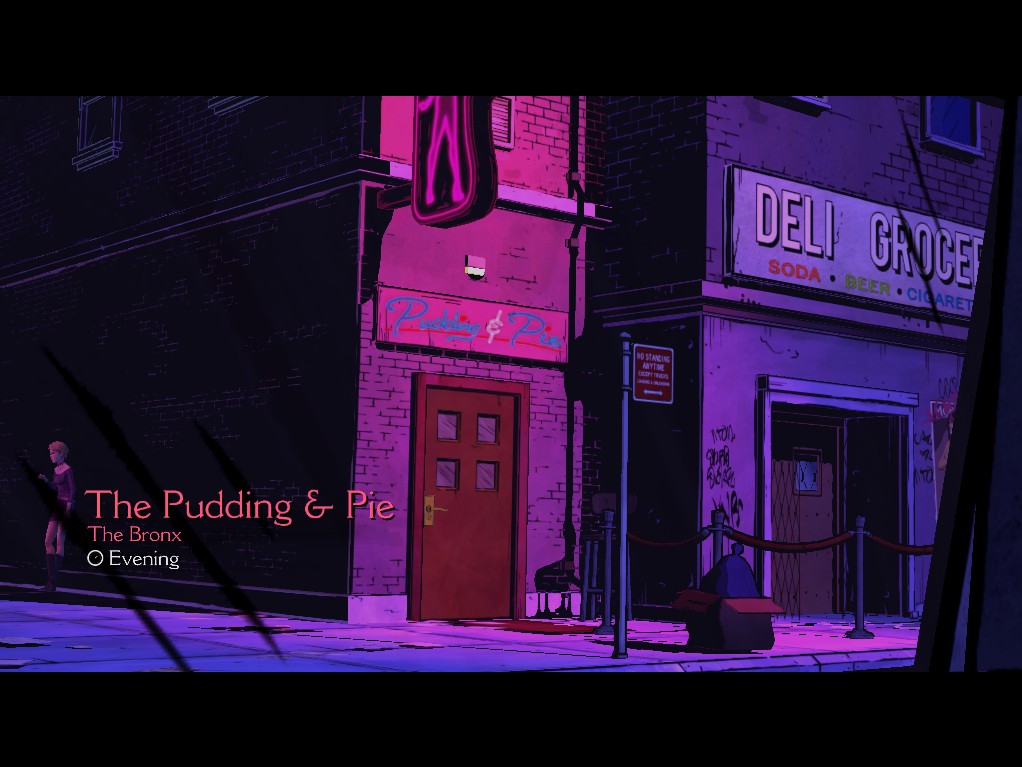 I do think Telltale should implement a skip dialogue button or at least a fast-forward feature. This allows players to save time when they replay the game because they already know what happens. On the plus, the branching storyline does create new outcomes such as when you go to Crane’s Apartment instead of the Trip Trap bar.

The Wolf Among Us – Extras

At the end of each chapter is a cliffhanger, leaving just enough to the imagination for you to deduce who could be responsible for the crimes committed. Likewise, it leaves more questions than answers when Fables you didn’t suspect could be involved in the tragic deaths of victims Faith and Lily, two girls who worked at the Pudding & Pie. 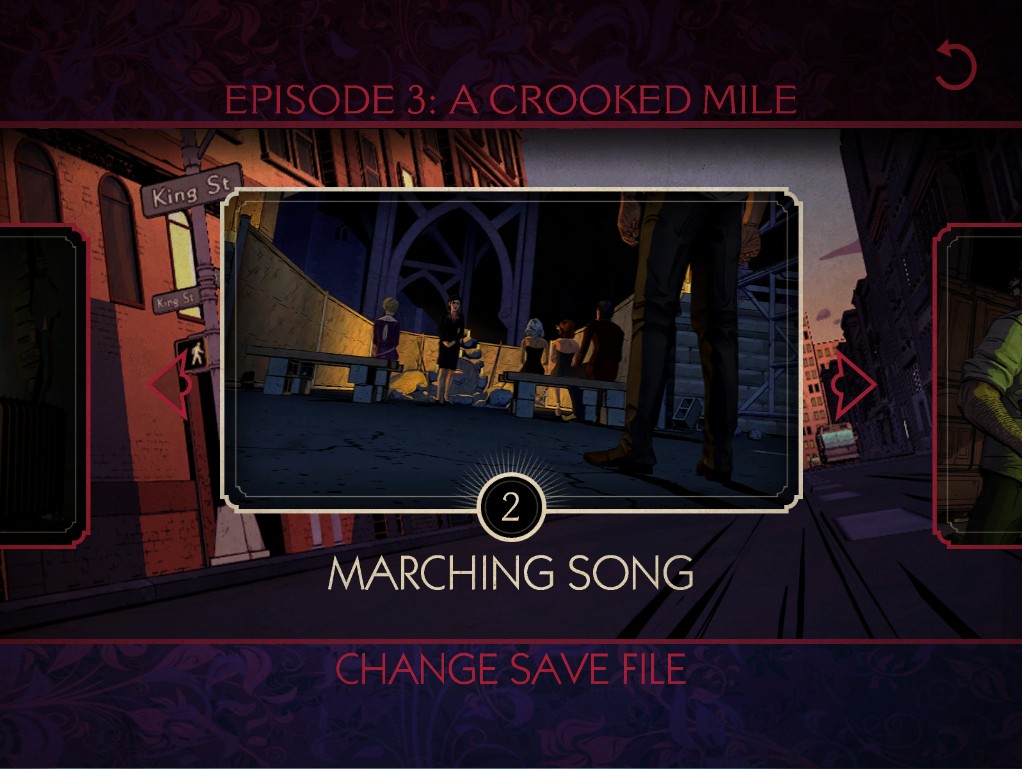 The one problem I do have with this game is the clunky save feature. When you have multiple playthroughs, it’s hard to tell which one you last played unless you look at the save date. If you have two files in the same chapter, then you’re going to confuse them. Even I don’t recall what path I chose in previous chapters.

The player choices menu shows the choices you made versus what other people picked. For example, 59% of the players decided to lie to Beast about finding Beauty. There are additional stats like “who was your prime suspect” or “who did you arrest”. The achievements only bookmark the chapters you’ve completed. 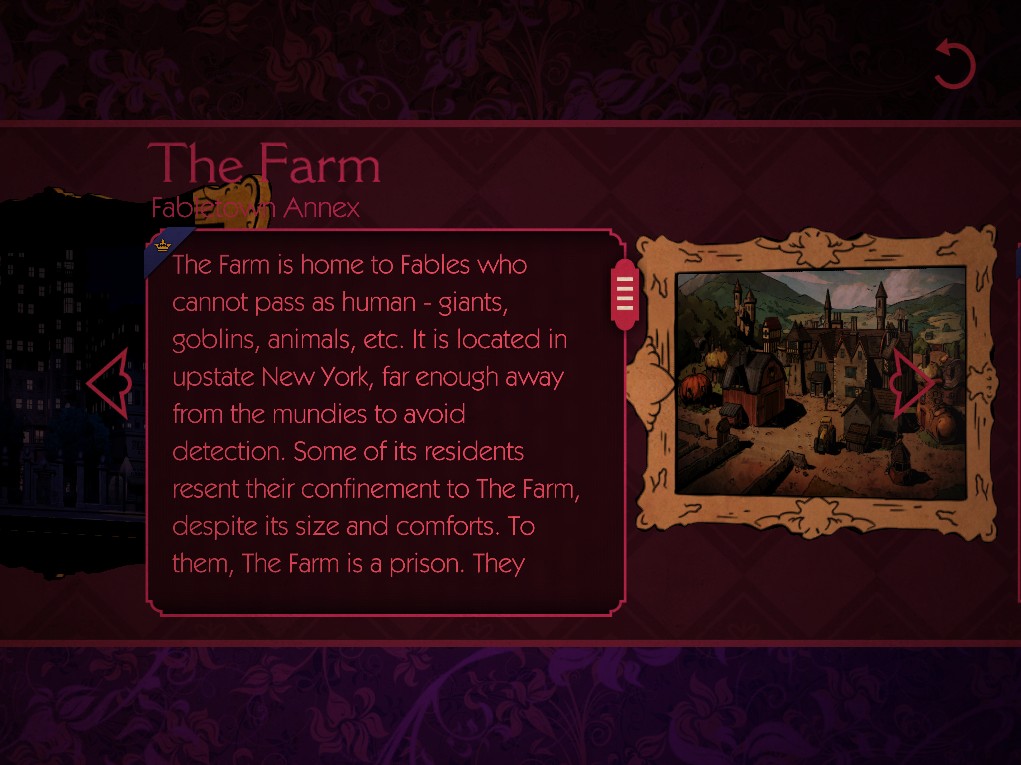 The Book of Fables is an interesting read if you have nothing else to do. It summarizes the backstories of every fairy tale character in the series including Bigby himself. Many of them are unlocked once you meet all the side characters. Non-human Fables are sent straight to the Farm, much to their dismay, particularly Colin and Toad.