Virtual Villagers 3-The Secret City is now available on Steam! An old-fashioned simulation game where you are God and it’s your job to raise a tribe of villagers by helping them survive on a seemingly deserted island. Embark on a new journey to the island’s northern shore, with a small group in search of new areas to populate.

Did you know that Virtual Villagers is a 5-part series of casual simulation games created by Last Day of Work? They are the same guys who did real-time games like Fish Tycoon and Plant Tycoon, both of which I played during my childhood; I had my own virtual pets to take care of between study sessions.

When the first Virtual Villagers: A New Home came out, there wasn’t much to admire: The island map was fairly small with dull graphics and the villagers had limited movement (walk-cycles, moving arms, holding an item etc.) Placing your villagers in certain areas and they would build a hut, do research, or catch fish. 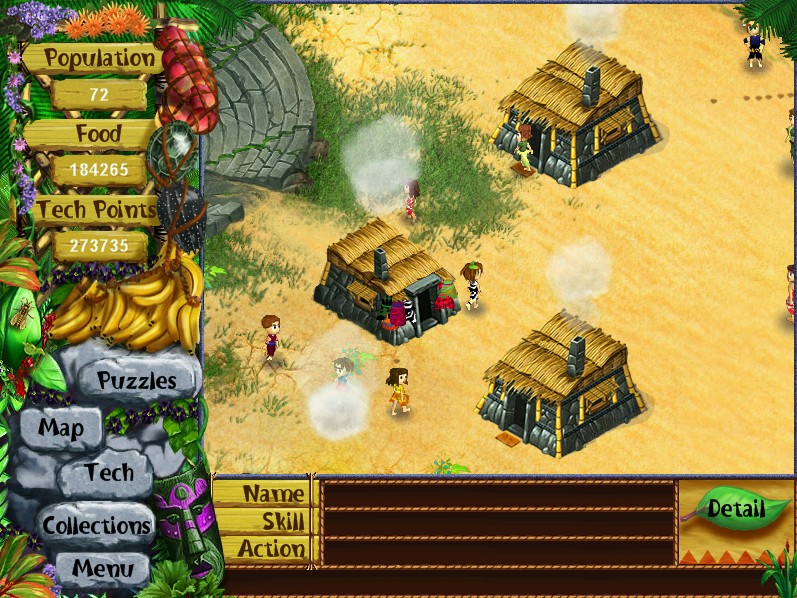 But that changed in Virtual Villagers 2: The Lost Children. This direct sequel quickly caught on with a mainstream audience. There was also more to do in-game; your villagers could harvest coconuts, build a hospital, prepare herbal stews, and change clothes, but the main goal was to restore the Gong of Wonder.

Over the years, you can tell they are getting better at crafting casual games that add a layer of complexity above simple point-&-click model. Both the second and third games added in the option to pick up shiny collectibles. Their backgrounds are composed just like real paintings, giving off the island’s beauty.

God’s Hand is at Your Disposal

I’m going to start off by reviewing the third game, Virtual Villagers: The Secret City. Although I played VV4: The Tree of Life and VV5: New Believers, they still aren’t on Steam yet. The story continues as a small group leaves the original tribe that inhabited the Western shore of the island. Caught up in a storm, they are shipwrecked onto what appears to be the remains of a ruined city. 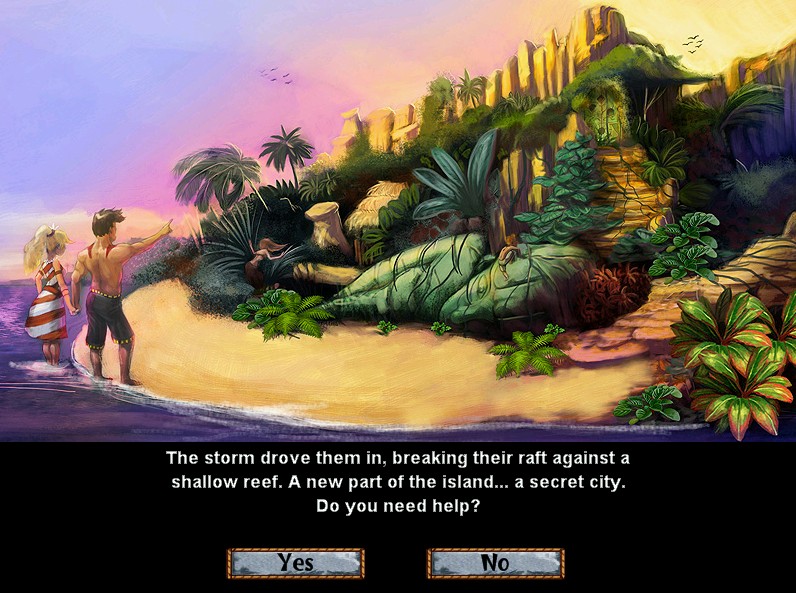 Your main objective is to ensure the survival of these villagers as they explore their part of the island called Isola. You can help them find new food sources and restore the crumbling infrastructure back to its former glory. Notice how your mouse is part of a hand. Truly befitting of a God, aka the guiding hand.

You must drag and drop them to different areas so they will gather food, research, build huts, or practice medicine. Always start by lighting a fire to ward off disease. Uncover the hidden mysteries behind Isola. Who was living here before and where did they go?

How does the third game fare from its predecessors? For one, they finally enabled real-time weather, the spawning clouds, periodic rain, and thunderstorms. There are new collectibles for the children to retrieve; coral bits, feathers, turtle shells, and stone tablets will materialize on the island.

Random island events are back, choose between two decisions and hope for a positive effect. You’ll get events once per day by logging back into the game. Another thing they added is the aging process by which your villagers start sprouting gray hair. Don’t be surprised if the children finally look like their parents.

Where to Begin in VV3: The Secret City

I do suggest that you try the Virtual Villagers series in order or else you may be confused by the plot. First, name your tribe as it marks your save file. After the intro, you will be asked if you need help. Selecting “yes” brings you to the tutorial.

The Secret City lets you choose the game’s difficulty: Easy, Medium, or Hard. It determines how much food you start with and the initial population of your tribe. The more people in your tribe, the more progress you can make in terms of technology points gained and quantity of food harvested.

The controls are rather limited to your mouse and the number keys. You can click anywhere and drag the mouse to move around the island which changes your field of vision. This lets you see the entire map. The alternative is to press the 1-9 keys that attribute to a specific section of the map, teleporting you there instead.

The white circle shows which villager you’ve selected (i.e. Name, Skill, and Action). It is also possible to pick up villagers by holding down the mouse button. You can drop them down at interesting or useful places so they will do something new. Drag children onto mushrooms to pick up and deposit them in your tribe’s food supply.

The “Detail” screen displays the health, gender, age, and skills of every villager. It also shows their likes and dislikes. This is where you can check a box to set their skill preferences. Do you want them to become a farmer, builder, scientist, doctor, or parent? The arrow keys let you choose between villagers’ stats.

There are multiple food sources to keep your tribe alive. Your villagers start off by harvesting honey from a beehive though later on, they plant seeds to produce fruit trees. Near the end of the game, your villagers have an unlimited food supply from fishing alone! Villagers will gain points in Farming while they gather food.

Dragging a villager to a broken hut will encourage them to repair it. Huts increase your tribe’s population limit. Villagers can raise their Building skill in several restoration projects from clearing some thick leaves, removing rocks blocking a cave, and restoring a broken bath. They have to prepare a plan before starting difficult projects.

At some point, you will be asked to select a faction. Nature or Magic? Each faction has its perks such as replenishing your food supplies and raising scientific productivity. Both offer you a special herb to get rid of the sharks: Either a berry or a pitcher plant.

Villagers dropped at the research lab earn technology points over time. They also become more adept at research as fellow scientists which advance the technology used by your tribe.

Spending Tech points under the “Technologies” shop is crucial to solving the puzzles on Isola. Science, Medicine, Alchemy, Restoration, and Leadership each hold special properties.

Villagers sometimes get sick and it’s up to your healers to cure them. Sick villagers are too weak to work. Their health depletes the longer you leave them ill. Buying medicine technology increases longevity and reduces the frequency of disease. Doctors are trained in the medical area. They automatically heal sick villagers.

Villagers that prefer parenting often bond with those of the opposite sex. They become better parents either by telling stories to children or “going indoors” to have some privacy. If you’re lucky, the stork brings a baby to the female villager who nurses it for 2 years. The guys pretty much hit on every woman over 18.

He or she is the chosen leader of your tribe. Upon donning the artisan red and yellow robes, one of your villagers will become the chief. They serve to motivate your tribe. The chief “directs work” which raises the efficiency of your workers. They have three unique powers: The ability to create more food, teach children, and identify a rare collectible. These will come in handy. 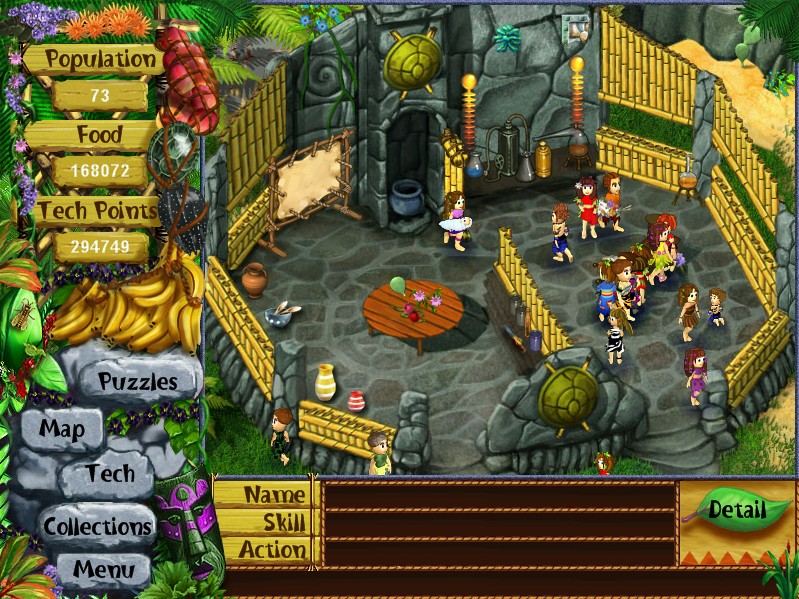 Alchemy is an unusual endeavor. You need to send someone to gather herbs scattered around the island. I recommend sending children to pick herbs since they run faster.

Once you’ve gathered three herbs, you can brew potions with unpredictable to downright bizarre effects. (Ex: Cactus + Cactus + Lotus makes a villager much healthier.) There are likely over 50 combinations to discover! 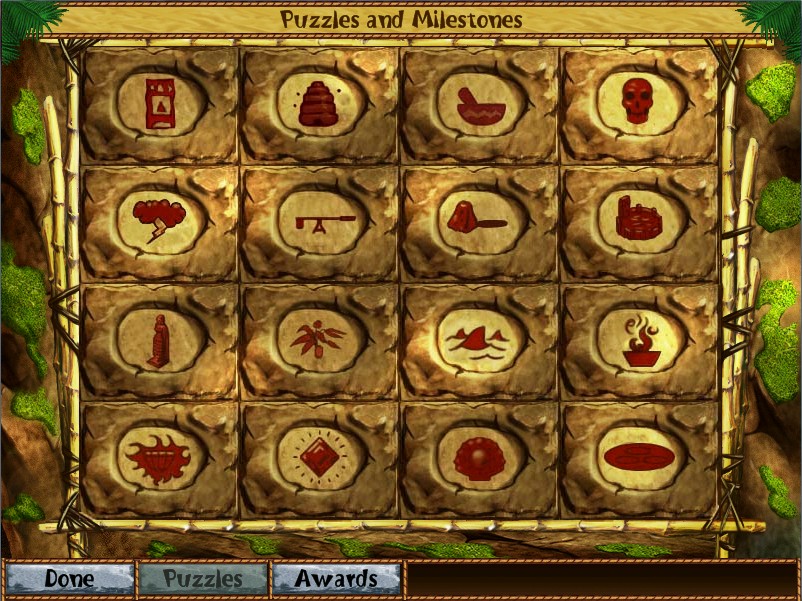 Anyway, I think I’ve rambled on long enough. Now I’ll bring you the last stage of my review of the puzzles. Every Virtual Villagers game has 16 puzzles to solve. The first four are relatively straightforward but the last eight tend to be tricky without consulting a guide. I won’t reveal how to get them since that would spoil the game.

These milestones are unlocked when you accomplish a significant feat that helps your tribe get closer to discovering the mysteries behind Isola. The tutorial explains how to solve the first two: The First Chief and The Beehive.

However, the rest requires obtaining higher levels of research in all areas. Sometimes a villager must receive sufficient training in a skill before they can perform a special task. Check back once in awhile as your village accumulates tech points when you are away.

The puzzles do increase your tribe’s potential for survival because of how they are connected to accessing new food sources or mixing potions to get a key gemstone. The rest is up to you and how you want to grow your tribe.