South Park: The Stick of Truth™

South Park: The Stick of Truth is an extremely mature game with vulgar jokes, sexual content, and horrible violence and because of this, my review may offend people who are faint of heart. South Park is a TV series notorious for its politically incorrect humor.

Proceed at your own risk! 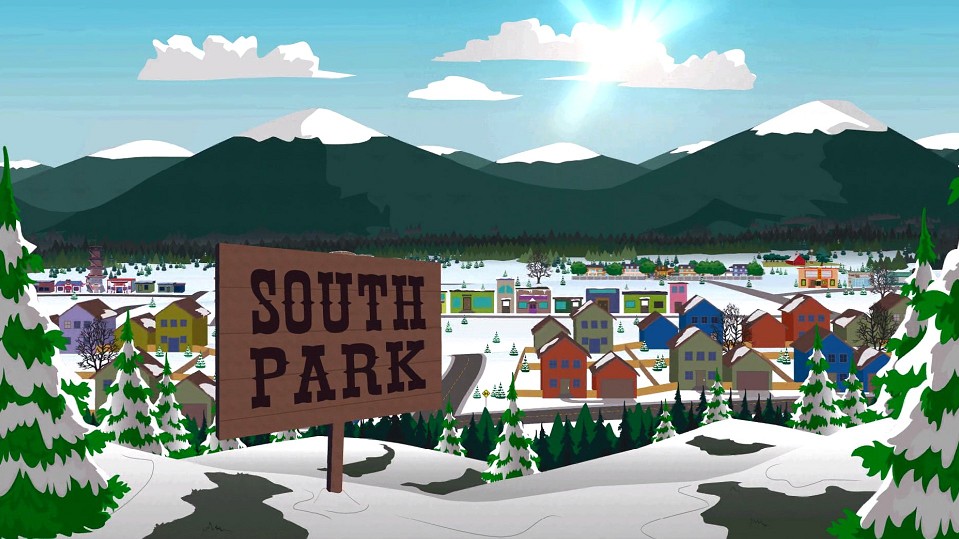 Rewind back to the year 2000, when I was a fresh-faced little kid and found a set of 4 oddly circular helmet faces in the attic that belonged to my dad and his friends on Halloween. They looked like cartoon characters so I asked my dad who they were, and he told me, “Maybe you’ll find out when you’re older.”

Once I was in high school, it later became a weekly tradition for me and my dad to sit down and watch those four little kids on South Park. When I learned that South Park was partnering with Ubisoft to make a fully fledged RPG, where you can make a South Park original character, I just had to own it!

On my first few days with the game, I pulled an all-nighter. Playing through the levels, I then showed it to my dad and continued again on the drive home from college he was giving me. Since then, I’ve played the game a few more times, and now, I finally have the privilege of reviewing one of my favorite RPGs.

The Story Behind The Stick of Truth

South Park: The Stick of Truth has a confirmed position in the South Park show, picking up directly after the Season 17 episode titled “Titties and Dragons.” You play the game as a new kid moving into the quaint little mountain town we all know and love. 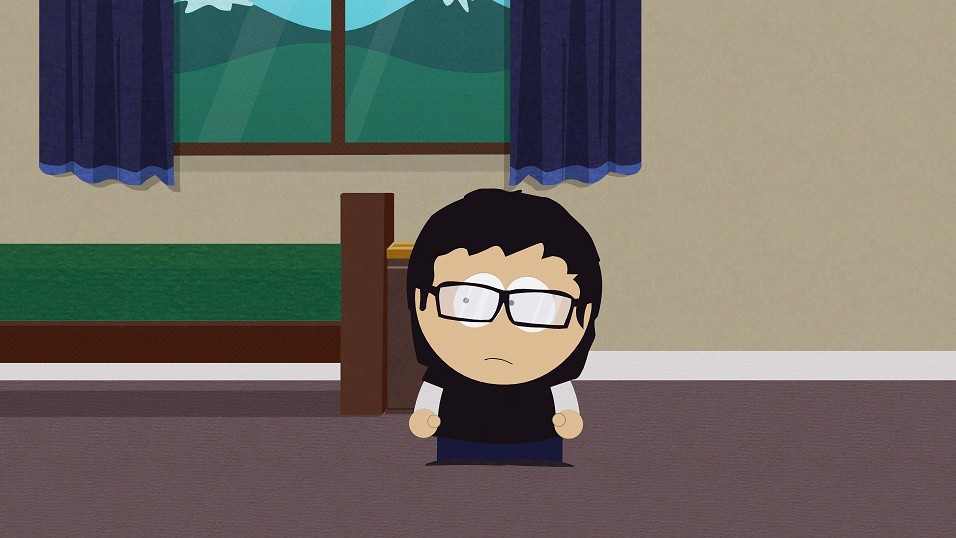 After creating your silent protagonist of a 4th Grader, your parents force you to get out of the house and make some friends. You then discover that the local gang of kids are in the middle of a town-scale fantasy role-playing game.

One side is the humans of the Kingdom of Koopa Keep or the KKK, led by the Grand Wizard King, Eric Cartman. On the other side is the dreaded Drow Elves led by the Elf King, Kyle Broflovski. In order to fulfill your parent’s wishes, you are going to need to jump into the fray with the entire cast of South Park.

The point of the children’s game is to be the team in control of the Stick of Truth. Anybody who holds the stick is immediately dubbed “Ruler of the Universe”, and that entitles them to dictate the rules of engagement for the game.

The rest of the story follows you, affecting both the game and the entire town over the course of three days spanning epic battles, incredible hijinks, and anything else you can expect from a typical episode of south park. 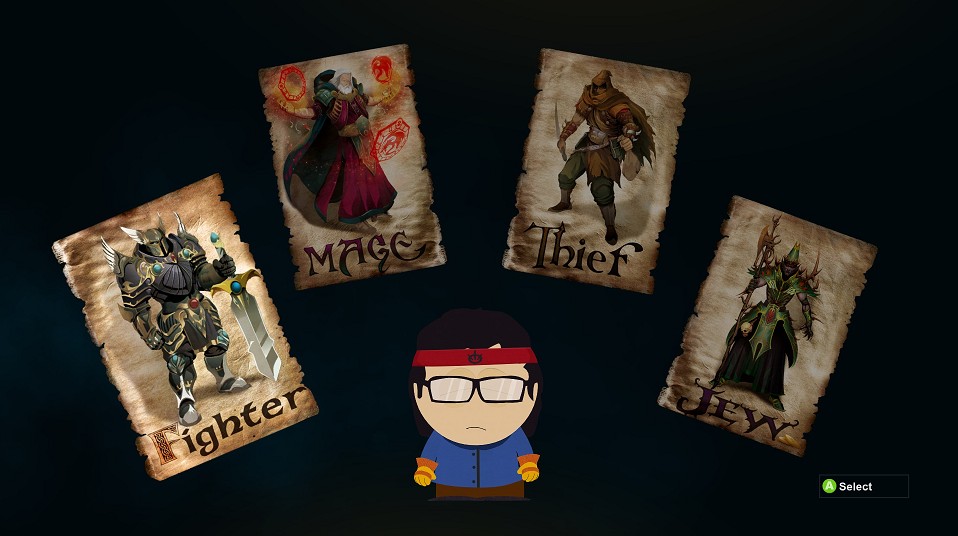 The game is a solid turn-based RPG with some small quick time events for your attacks and defenses to improve how well an attack or deflect will turn out. You are also not alone in your fights as you can ally with 6 of the more well-known characters from the show, each with a unique style and ability during the fights. 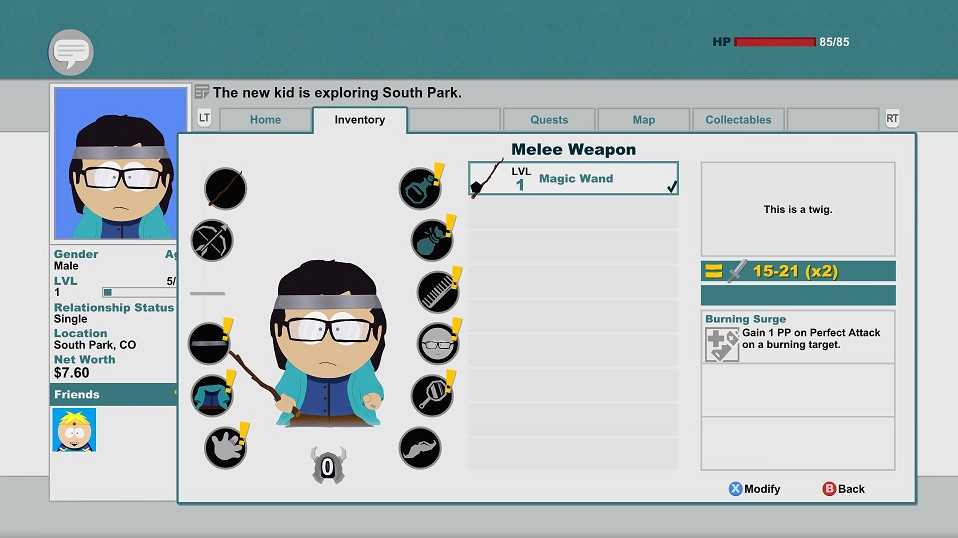 Upon joining the game, you are given a choice between 4 Classes that will determine what sort of special attacks you’ll receive. Standard presets (whatever kind of class you pick) will be a melee weapon, a ranged weapon, and a “magic” system of attacks different from your special attacks.

These magic attacks are derived from your character’s unique talent for passing gas, extending from things like ventriloquism farts for distractions to explosions of great power able to rip down walls.

It wouldn’t be an RPG if you couldn’t affect the numbers you can deploy. You have the option to upgrade your powers, give yourself passive boosts based on the number of friends you make in town, and lastly, pick and fine-tune your gear. 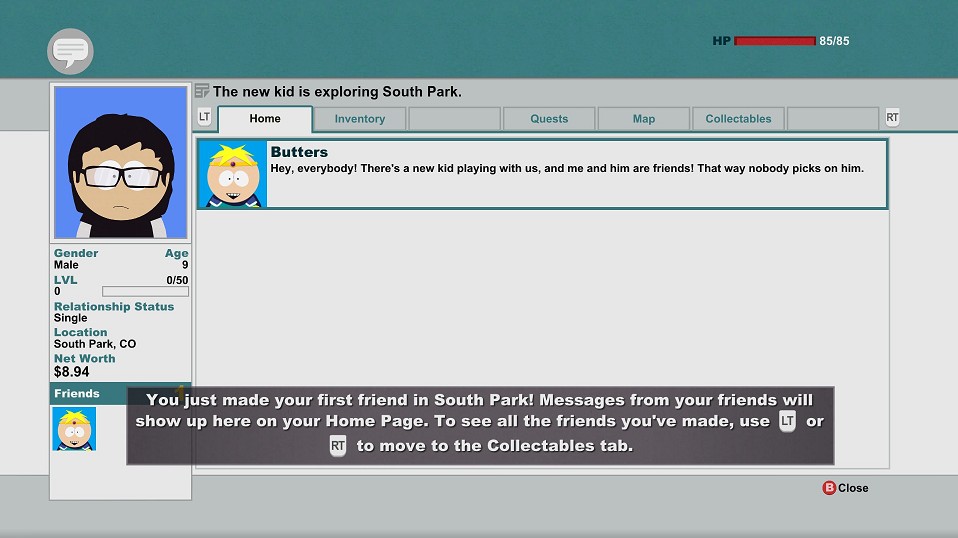 Throughout the game you will receive items known as Strap-ons and patches for your weapons and armor, that will bolster the way that your gear will perform in a fight, and this gives you a better way to customize your fighting along with the natural abilities that your gear already has.

Lastly are the collectibles, because, despite the town map’s small scale, there are a ton of things to dig up. But the two that would be considered similar to collectibles are friends and Chinpokomon, which are simple references to an episode spread all throughout the town in puzzle-like situations you will be asked to solve.

However, friends in the game can be gained by simply speaking to townsfolk, fulfilling quests, or advancing the plot. After recruiting friends, you can see them on your pause screen talking on a HUD that resembles Facebook. They are seen making little quips back and forth with humor typical of those characters.

As mentioned a bit before, friends can lend you passive abilities like being more effective in combat in different ways, such as doing better when enemies are afflicted with particular status effects.

Lastly, your allies in the game let you, once per day, wipe out a fight you come across, which is nice if a battle is causing you too much trouble. These friends, however, are adamant about only doing it once a day, and will not help during boss battles. 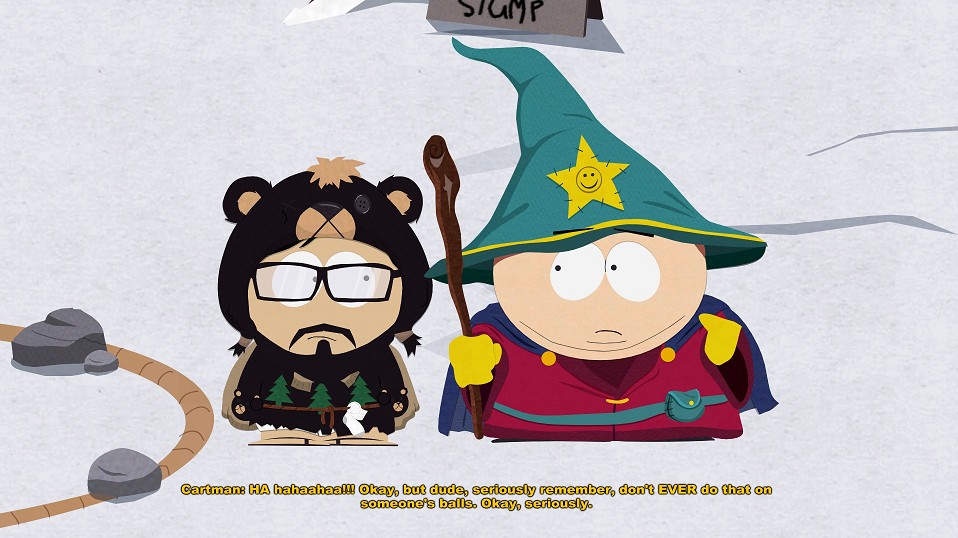 The game gives you a wealth of options when it comes to customising your character, with the only real restriction being that you are stuck as a 4th grader in stature. You can wear facial hair, wigs, makeup, accessories, or even dyed outfits, provided you manage to find the dyes around town.

So in appearance, you have the choice of making a character as odd looking as you wish, but other aspects of your character are left out of your hands. Gameplay wise, you are heavily encouraged to use gear around your level rather than those that appear “cool”. Your name, “Douchebag” is unavoidable, as everyone will either call you that or new kid.

I’ve seen plenty of South Park games before, but none were very good or felt real. This game feels like South Park judging from the humor to the characters. I’ve never seen a game so authentic to the source material, and as a fan of the show, I appreciate that.

It is consistently funny, it is also crude. South Park: The Stick of Truth doesn’t ask for forgiveness, and it shouldn’t have to. The spirit of the gameplay is great, and just for that alone, I fell in love with the game.

For the diehard gamers who happen to be South Park fanatics, here is a walkthrough on getting 100% achievements on your first try!

I would like to say first that I love South Park, I have been a fan of them for years, but as such, I refuse to pull my punches, and know that what I say, I say because I care about how they can improve upon their games.

There were a lot of other things they really fell short of. Combat is repetitive, and I mean very repetitive. If you play the game for one hour vs. 10 hours, combat is the same. It is a good enough system to keep afloat, but it has little variety.

Next, was something you wouldn’t notice unless you played through the game more than once, and that is the illusion of choice. All of the maybe half-dozen times I won the game, I ended up being the same character by the time the game ends.

The differences in classes and choices practically don’t matter. Most of the moves between classes offered the same results, only different methods. This made me feel like my choices didn’t really factor much into the overall product. In addition, the game is far too easy. Once you learn the correct method of obliterating your enemies, you can do it all the time through debuffing status effects.

Making an enemy become a bleeding mess that is set on fire and vomiting pretty much makes combat a no-brainer. Truthfully If you like the show, you will like most of the game; the story and humor are what really saved it. Too bad your favorite 4th-grade class is limited to moving on a grid board.

I hate to say this, but I found The Stick of Truth to be boring and repetitive. The combat system relies too much on spamming the same attacks over and over. As for the graphics, I didn’t expect anything different from the series. The shining point had to be the story since it has the satirical but disgusting humor executed perfectly.