Left 4 Dead 2 is the second installment of a zombie-apocalypse shootout simulator. Join your friends in multiplayer (or lone-wolf it) across five campaigns as you rip apart zombies with your chainsaw, blast the infected undead with machine guns, and pray to God you don’t run out of ammo. If you want the full horror game experience, there are co-op and survival modes to take on.

Left 4 Dead 2 is considered a co-operative survival horror FPS, though I see it as a series of campaigns where endless waves of zombies attack your party until they make it to the next safe area. It takes place a week after the events of Left 4 Dead, as four survivors are left behind to fend for themselves at the top of a hotel against the infected humans. 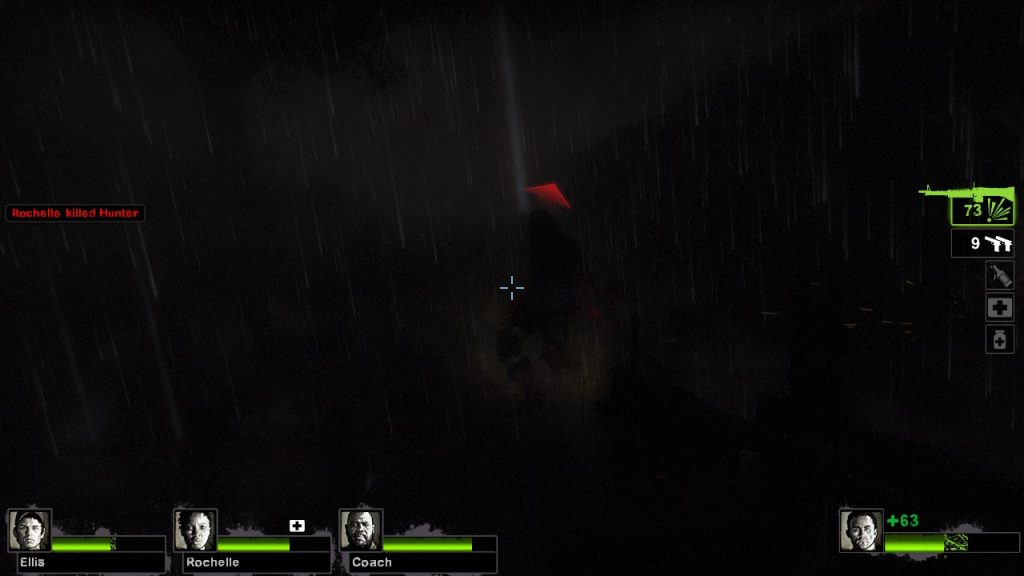 The sequel went above and beyond in creating new campaigns for players to test out. There’s the standard Co-op, where four people team up to reach the end. Any character not selected by human players will be controlled by the AI bots once the game begins.

Single player games are strictly offline so only one player controlled character is allowed per run. Your teammates are all bots so they can’t throw bombs or hold onto a second weapon. This is considered the story mode of Left 4 Dead 2 and is beginner-friendly. 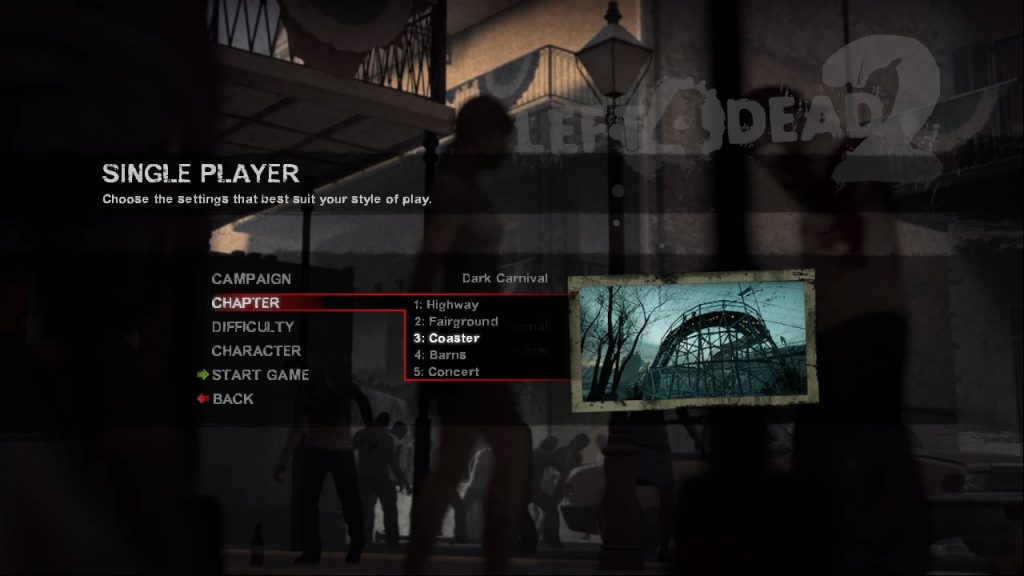 Survival modes belong to a DLC pack, featuring 16 challenging maps for the daring. You basically have to stay alive as long as possible until the infected overwhelm your group due to increasing difficulty. From what I’ve seen, this game is more fun with other players.

But if you want to play competitive, then Versus mode lets you join a team of either the survivors or the “special infected” where the game continues until every survivor is killed or incapacitated. Scavenge mode sends the survivors on a search for gas cans to power a vehicle or generator before the infected can get them.

The other two modes include Realism and Mutations. Mutations force you to fight the special infected without your teammates. Realism removes halos for nearby items or weapons to force players to rely on each other in coordinating attacks. 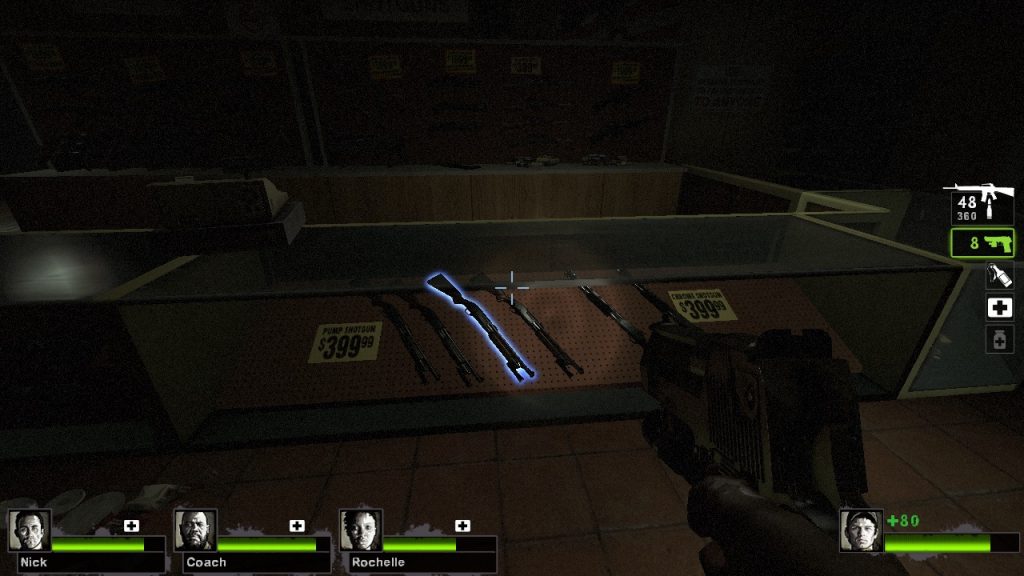 You play as one of the remaining survivors of the zombie apocalypse that ruined the city of Savannah, Georgia. The small group of four, Nick, Coach, Rochelle, and Ellis are sticking together to hunt down zombies, or better yet, get the hell out of dodge. It’s like they say, out of the frying pan and into the fire.

I spent the majority of my playthrough on this mode since the Co-Op campaigns require multiple players. But it was still a blast killing all the zombies even when the bots are being incompetent by setting off alarms or shooting a special infected at close range. I set the difficulty to Easy since I’m not a hardcore FPS gamer.

On any map, you begin at a safe room with a choice of three to four weapons including a single pistol. The guns are classified into rifles, shotguns, and pistols; some are semi-auto, a few are hunting, others tactical, and one is a sniper. The ammo stash is worth grabbing too, especially if you are running low on bullets. 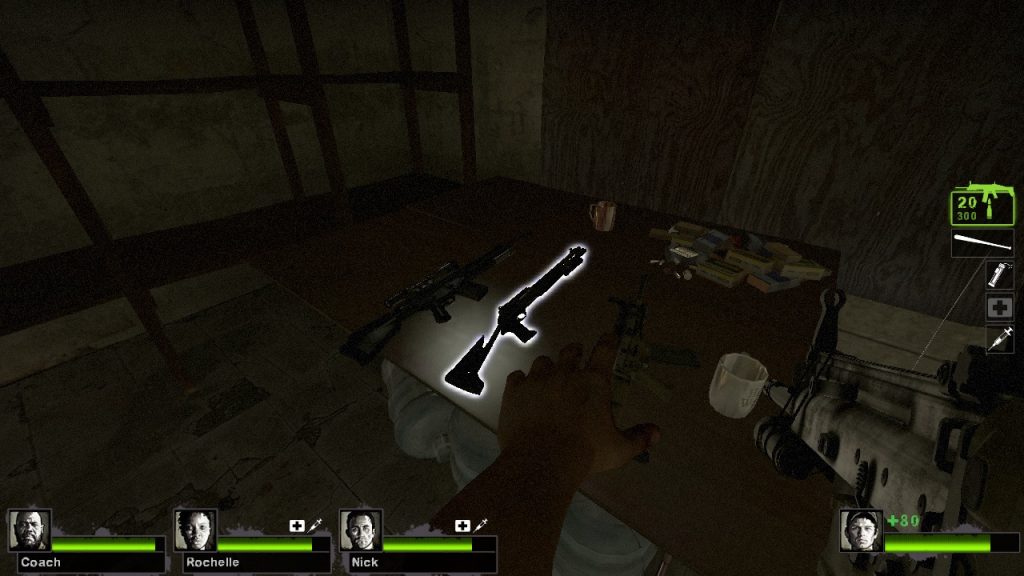 The second weapon slot can hold either dual-wielding pistols or a melee weapon, like a baseball bat, a katana, a skillet, a chainsaw, and even a guitar, to smack the zombies where it hurts. First-Aid kits are essential to staying alive, so I don’t see why anyone would skip them. The third slot in your inventory holds explosives which are deadly to large hordes of zombies in range. 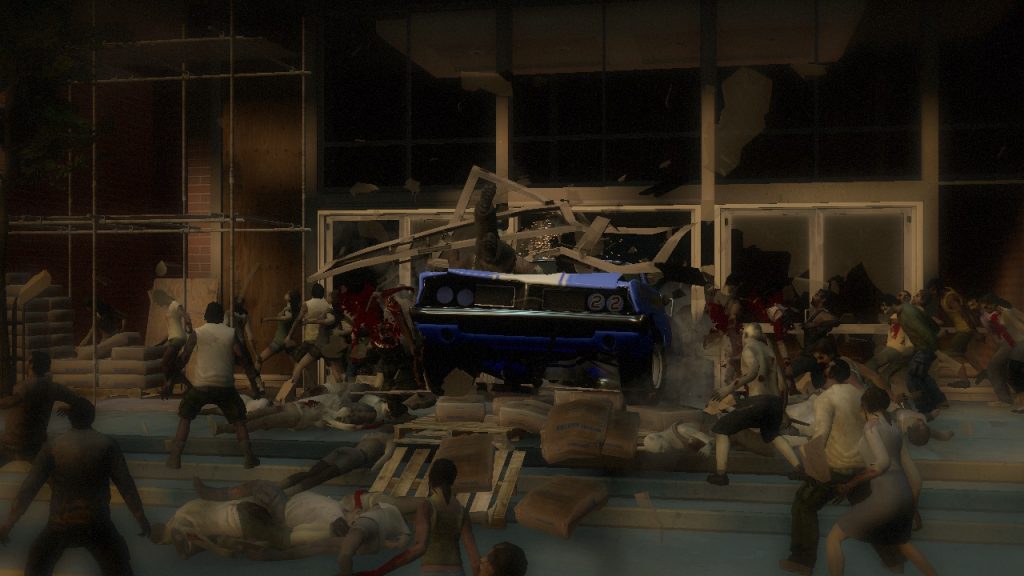 I always picked Ellis just because he has the best one-liners. Nick is clearly the no-BS blunt guy, Coach is mature the voice of reason, and Rochelle is the down-to-Earth girl who kicks ass. Ellis is that really awkward guy who jokes around at the worst times. These guys are surprisingly tough: They can keep shooting after reaching zero health, lasting several minutes while incapacitated.

I didn’t notice any difference in combat prowess among the team of four; the only changes lie in what they say. You can play as anyone without having to assess their abilities. They each get to carry first-aid kits and extra pills whenever they lose a lot of health, though you the player, are the brains of the operation. 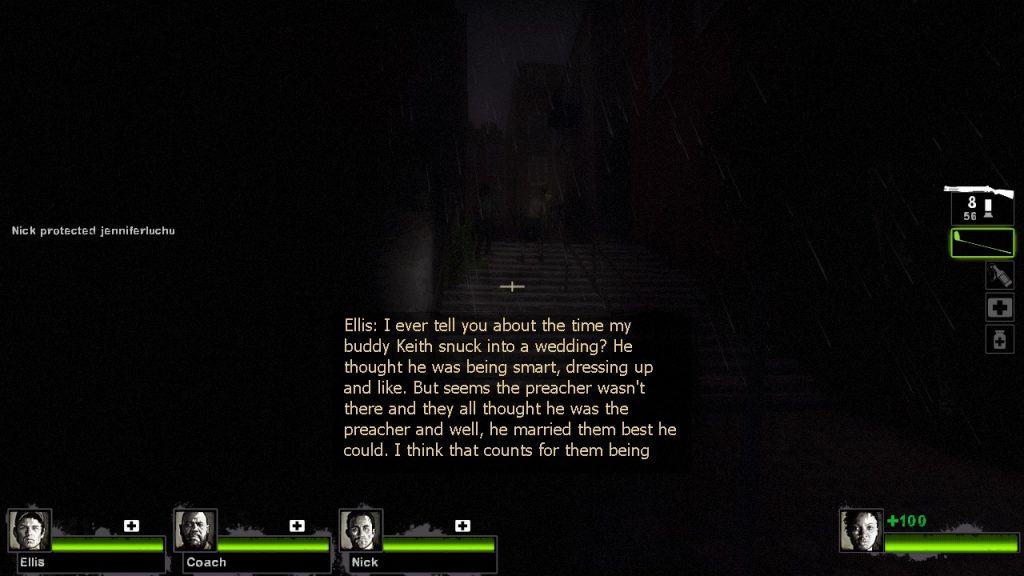 As the leader, the other bots will follow you around while you’re exploring each area because there is strength in numbers. L4D2 is not technically a horror game since it’s not scary per se, but rather you have to be prepared for zombies charging in from all directions.

Being aware of your surroundings is only the first step in surviving a zombie apocalypse, which is why you should keep the flashlight on in order to avoid any unpleasant surprises. Although L4D2 doesn’t have jump scares, it does throw special infected zombies at you, judging by the grunts and hisses that imply they are nearby.

You have the run-of-the-mill infected zombies. These guys are practically everywhere; inside buildings, behind doors, prowling on the streets, or running at you in waves. They do the least amount of damage and are easy to kill, except when there’s too many of them. 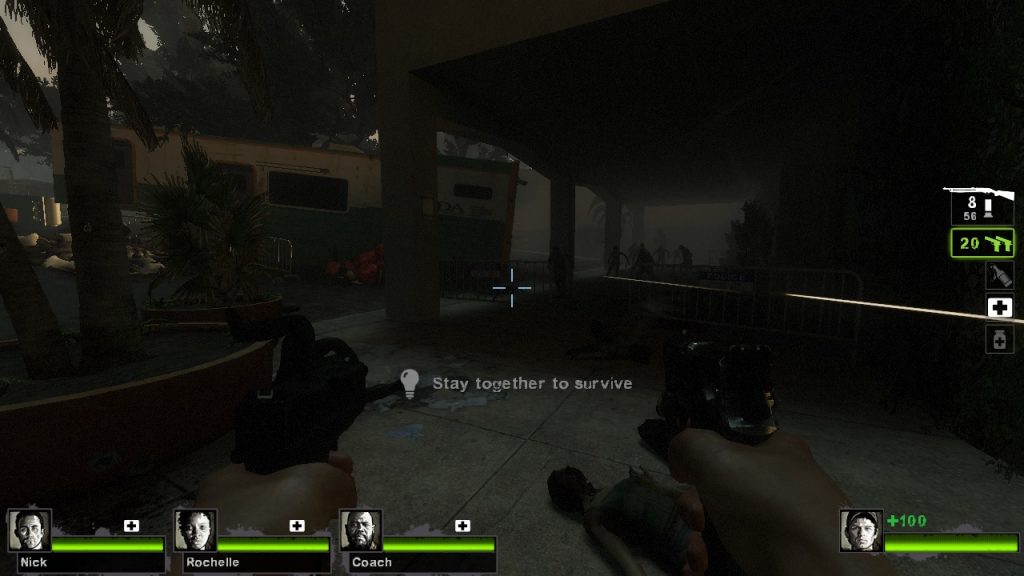 As for the special infected, those guys are a real pain in the ass. Nobody wants to be on the receiving end of a strangling tongue or covered in bile that attracts the horde. They like to latch onto one of your teammates and will take them out if you don’t gun them down fast enough.

Whenever you hear strange sounds in the distance, you know a special infected is approaching. Jockeys laugh maniacally, Boomers gurgle then explode, Hunters leap like ninjas, Smokers trap you with their tongue, and Chargers run over you. Worst of all is the Witch, who cries like a woman. The deadliest zombies are definitely the Tank and the Witch.

Most of the time I just let Rochelle, Coach, and Nick take down the Hunters and Chargers since they are too fast for me to take aim. I usually end up blasting Tanks with assault rifles. I still prefer to shoot the sitting duck zombies since they are fast as fuck on steroids once you approach them. 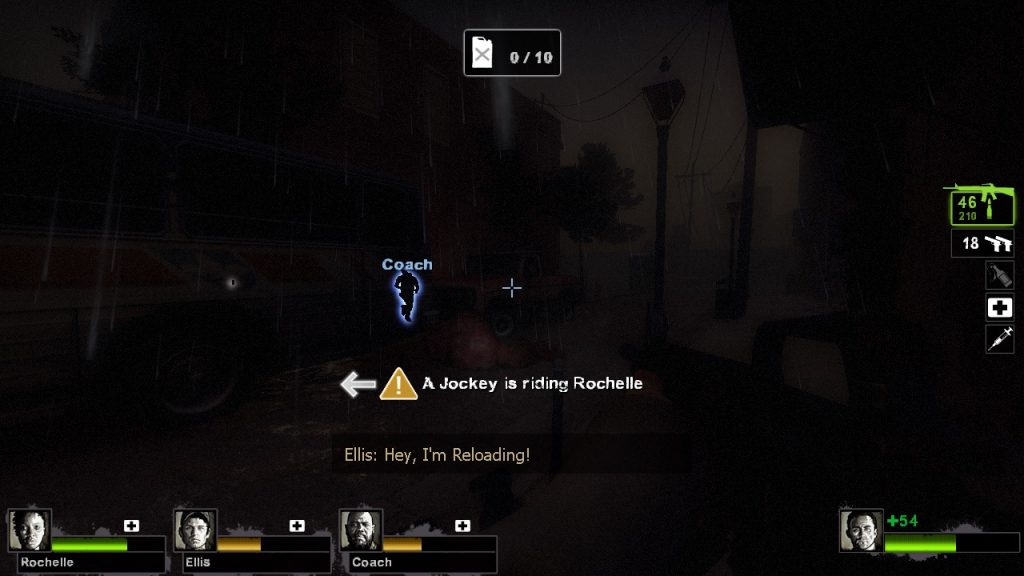 Tanks must be gunned down asap because it could wipe your entire team, hurling chunks of cement like the Hulk. Tanks can take a ton of bullets and will keep pummeling you until they die. Witches won’t attack unless provoked by gunfire or bright lights. That’s why your party always turns off flashlights around Witches.

As a modern FPS, L4D2 uses a combination of visual and audio cues to make an objective stand out. They highlight a power generator to turn on or gas canisters you need to fill up a car. You’ll notice that the red arrows point to zombies that are attacking you. For instance, dramatic music plays right before a wave of zombies starts flooding in. 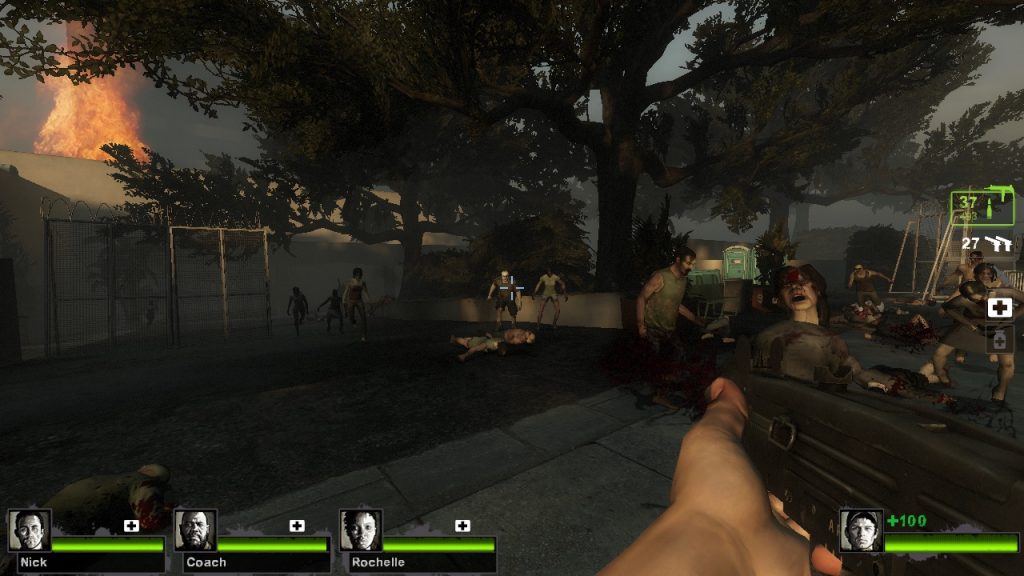 But that’s where the fun begins in L4D2. It won’t be a shootout without the horde ready to tear you apart as soon as you think the coast is clear. That’s why you have the option to swing your baseball bat, paddle, or crowbar at close range. Of course, I prefer to dual wield pistols so I don’t have to run into an infected zombie.

That being said, you’d never want to meet the infected horde in a dark, disgusting sewer. Not only is it too dark to see, but you’re also forced to wade through water just as the zombies start chasing your team down a tunnel to the next safe room. These campaigns are staged by the Director who determines where zombies can spawn. 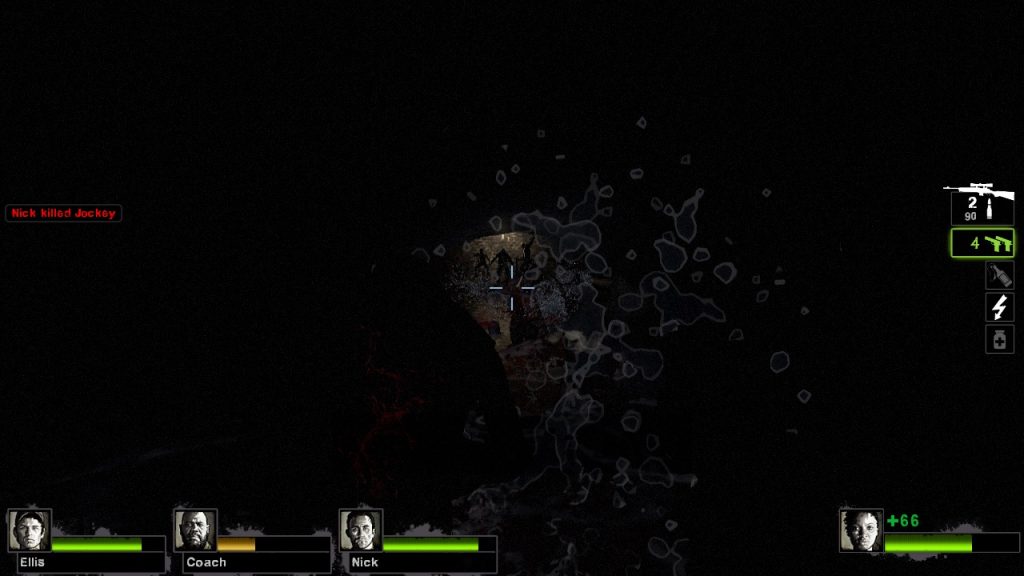 Once you’ve played more than your fair share of campaigns, you’ll realize that the infected often charge at your group in waves, with the most vicious ones near the end of a stage, where the next safe room is in plain sight ahead. I’ve died several times already from trying to reach the safe house in both Dark Carnival and Dead Center maps.

Assuming you get the chance to play Co-Op, explosives are sure to come in handy. Ammo is sometimes scarce, whereas weapons are scattered all over the map, thus you should keep backup explosives in case you can’t fend off the invasion. That goes triple if anyone else is out of med packs. 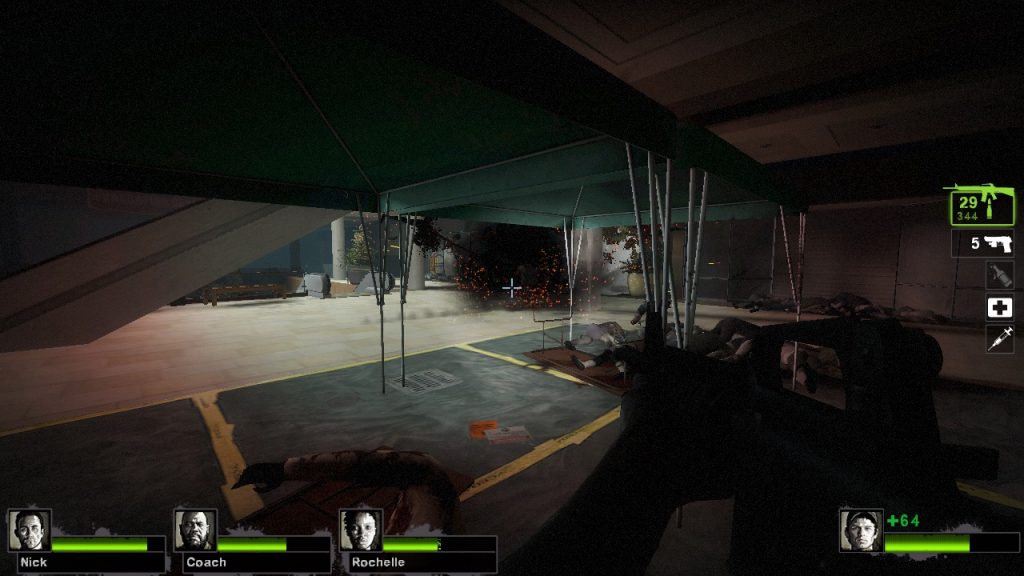 Pipebombs are my favorite explosives simply because throwing one distracts the infected horde, to buy time whenever I need to heal or reload my shotgun. Unlike grenade launchers, I don’t have to worry about accidentally blowing up my teammates.

Molotovs are a close second, though they aren’t actually bombs. The flames serve as a barrier that damages the zombies before they can reach me. Bile Bombs don’t kill any zombies though they do lure them into one cluster for easy shooting. Too bad you can’t carry more than one. 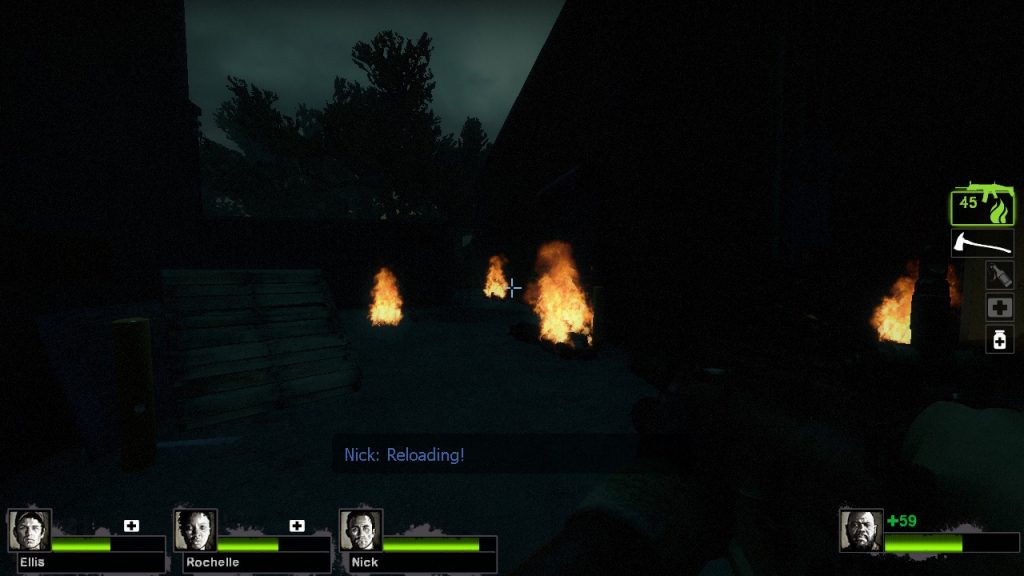 Lastly, you get higher-tier weapons as you progress through each map. Often you’ll receive incendiary ammo cans to deploy fire rounds. Flaming bullets will set zombies on fire, which prevents them from ganging up on your group. It’s a friendly reminder that the only good zombie is a dead one.

I’d seriously recommend this game to anyone who has played Halo, Call of Duty, or even Fortnite on consoles. Despite the spike in difficulty on Normal and Hard modes, people who enjoy online multiplayer FPS should give Co-Op and Versus modes a try by inviting their Steam friends. L4D2 has a chat log in case you need to talk to someone who joined your game.